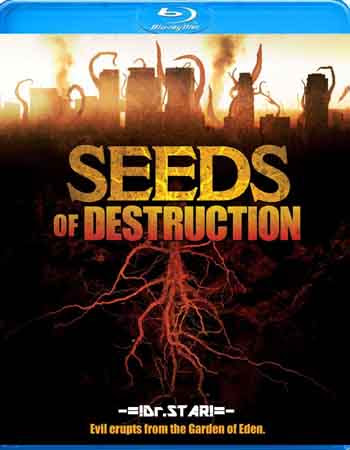 Original title: The Terror Beneath

Story… When the seeds from the original Garden of Eden are carelessly released into today’s toxic climate, the plant is transformed by our contaminated environment into a writhing mass of foliage that wreaks havoc all over earth.

In a Nevada mining area, environmentalists Jesse Moss (as Joe) and Luisa D’Oliveira (as Kate) have staked out a position in order to catch polluters on camera. Instead, the young lovers watch as a man cuts himself and heals his wound with a leaf. Next, the healing plant’s seed is procured. It grows a mammoth root that causes mammoth earthquakes. Nearby scientists are aware of the problem. There are more seeds, and more earth-shattering disasters. Secret agent Adrian Pasdar (as Jack Tompkins) learns from blonde botanist Stefanie von Pfetten (as Jocelyn Stein) that the seeds are from the Biblical “Garden of Eden”. When banished from their blissfully perfect home, Adam and Eve stole the seeds. Presently, the giant roots ravage the land and threaten to extinguish all human life on the planet…

With some notable exceptions, God has a history of killing everyone on planet Earth. But don’t let that ruin the story for you; perhaps, He is merely giving the characters in “The Terror Beneath” a very scary warning. And, if you want to say God was sleeping on the job when He let the seeds out of the Garden, remember He also let in a nasty snake. God may have some good seeds up His sleeve. Of course, it’s also possible God has no active participation in story. Syfy director Paul Ziller should know for sure, since he was also part of the writing team. The credit “Produced by Raymond Massey” refers to the grandson of the original. The greatest special effect is a wobbly camera. The landscaping, before camera shaken, is nice. This dumb movie was retitled “Seeds of Destruction” for home video release.